ACC was founded in 2008 to address a gap in services for low-income, Spanish-speaking families in North Aurora. 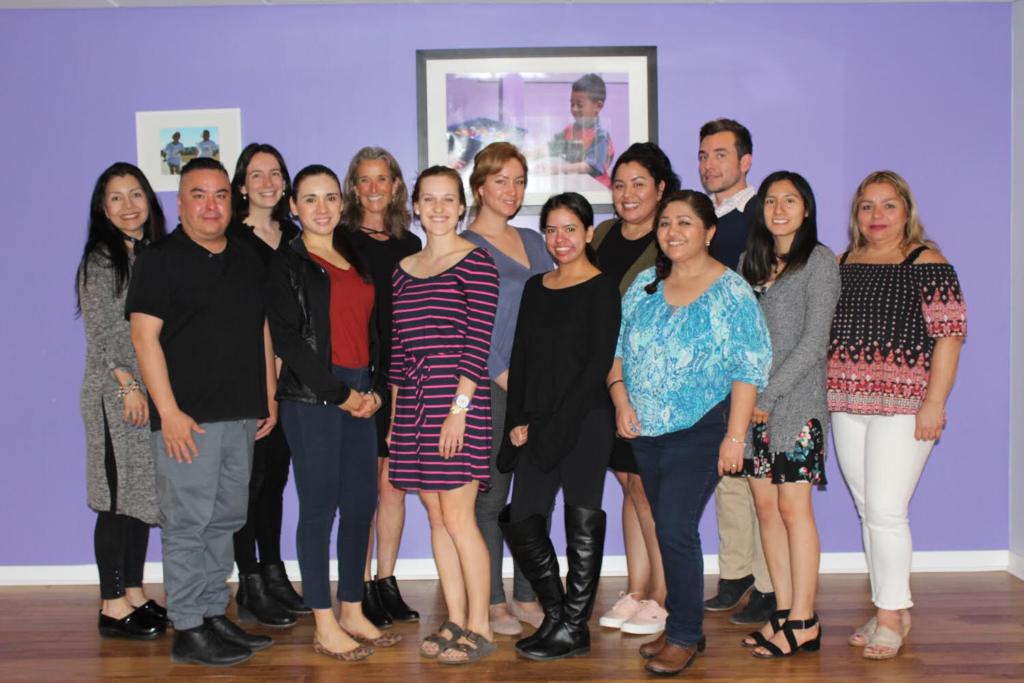 ACC relies on the dedicated support of its staff, interns, volunteers, board and community members. All staff are bilingual in Spanish and English.

Dr. Robin Waterman earned her bachelor’s degree from Bates College, with an interdisciplinary focus including anthropology and English. She later earned her master’s and doctoral degrees in education from Harvard University, specializing in administration, policy and social policy, after spending more than 20 years in the field of non-profit administration and community-based education. Dr. Waterman has founded and developed community-based education programs for low-income, culturally and linguistically diverse families in Denver, Aurora and Commerce City, also working in this area for three years in rural El Salvador and Mexico. Since 1999, she has worked in Aurora, promoting leadership, self-sufficiency and parent involvement in schools and communities. Dr. Waterman is bilingual and bicultural, and has demonstrated expertise in recognizing the strengths of Latino immigrant families and guiding low-income individuals to simultaneously access services and volunteer time toward program implementation. For these reasons, Dr. Waterman was hired by the Family Resource Center Association in 2007 to create the ACC, and was hired by the ACC Board in 2008 to serve as Executive Director.

Teresa Torres began as a volunteer at ACC in 2011 and has been a full-time employee since 2015. She has a bachelor’s degree from the University of Northern Colorado, as well as a master’s in public health from Capella University. Teresa was born in the United States but spent her high school years with her family in her parents’ hometown of Jalisco, Mexico. Prior to working at ACC, Teresa worked at the Tri-County Health Department, with the Women, Infants and Children (WIC) program. Teresa is a trained nutritionist, certified lactation counselor and licensed daycare provider with over 10 years of experience teaching preschool. Teresa is also a certified Health Insurance Navigator. At ACC, Teresa has helped families apply for public and private health insurance, as well as navigate community-based health resources. She also teaches a weekly Cooking Matters class at ACC. Teresa was recently promoted to the position of Programs Manager because of her demonstrated skill in the area of staff and program management. Teresa and her husband live in Denver with their son, Leonardo, and return to Jalisco, Mexico every November to be with extended family.

Nohemi Burciaga holds a bachelor’s and master’s degree in social work from Metropolitan State University of Denver. She began working at ACC in 2014 as a family advocate, drawn to the role by her desire to work with Mexican-American immigrants. Nohemi later became ACC’s Family Programs Coordinator, working alongside various community partners to implement parenting programs. In 2017, Nohemi transitioned to a role with Arapahoe County, where she worked in the Child Protection Services Division, providing parent education and case management through trauma-informed practice, and supporting parents in creating nurturing environments for their children. In 2019, Nohemi returned to ACC, where she currently works as Wellness Programs Manager, developing programs that meet the mental health needs of both youth and adults. Nohemi grew up in Juarez, Chihuahua, Mexico.

Dr. Ivan Sosa holds a bachelor’s, master’s and doctoral degree in social work, and is a registered psychotherapist. He has received a number of scholarships to support his academic pursuits, including the McDonald’s HACER Scholarship, the Hispanic Chamber of Commerce Scholarship and the Latin American Educational Foundation Scholarship. Ivan was born in Ciudad Juarez, Chihuahua, Mexico, where he completed his elementary education. Ivan and his family later moved to the US, where they have lived ever since. Ivan has volunteered for the Rape Assistance Hotline and the Colorado Lawyers Committee (CLC), where he provided translation services to CLC clients, thereby enabling them to obtain pro bono legal services. Ivan would like to become a licensed clinical social worker and help expand ACC’s mental health programs and services. He has worked at ACC since September 2013.

Javier Garcia Arellano has worked as a family advocate at ACC since 2015. He is a graduate of Regis University, where he studied marketing. Javier grew up in Zacatecas, Mexico and immigrated to the United States as a young adult. At ACC, Javier is a Certified Health Navigator with Connect for Health Colorado and has developed expertise in helping mixed status families manage the complexities associated with their differences in legal status. Javier is well-known throughout ACC’s local community as someone who brings a great deal of patience and compassion, as well as skill and knowledge, to his work helping families navigate a myriad of health care resources. In addition to family advocacy work, Javier leads Insanity exercise classes for adults and teens, and coaches CATCH exercise programs for elementary-aged children. Javier also helps promote ACC programs through social media and direct outreach, and recently helped redesign ACC’s website.

Aliria Bello studied Education at Universidad de Carabobo, with an emphasis on teaching English as a second language. After moving to the US, she obtained a K-12 teaching license from the Colorado Department of Education and dedicated her career to working with students of diverse linguistic backgrounds. Aliria has over 20 years of experience as an ESL teacher and has taught both children and adults. She also has experience in early childhood education and in coordinating after-school tutoring programs for elementary school children in various school-based and community settings. Aliria is from San Felipe, Yaracuy, Venezuela and has lived in the United States for nearly two decades.

Eliza Graumlich has a bachelor’s degree from Bowdoin College where she studied Spanish, Latin American studies and education. After graduating, Eliza moved to Madrid, Spain, where she worked as a teacher’s assistant at a bilingual public school. She has over five years of experience teaching English to adults and children with diverse linguistic and cultural backgrounds and three years of experience as a tutor for America Reads. Additionally, Eliza has worked and volunteered at various nonprofits, including the Seattle Public Library and the Museum of Ventura County. Outside of her work at ACC, she is a freelance translator and an activities leader at the Denver Public Library’s Plaza program.

Yurima Crowley initially became involved with ACC as a participant in ACC’s Family Leadership Training Institute. Soon after graduating from that program, she began to volunteer at ACC, taking out a small-business loan and creating a micro-enterprise program. Through this program, Yurima guides members of the ACC community in making jewelry, which is sold at pop-up markets coordinated by R Bazaar, a nonprofit that honors the journeys of refugees and immigrants through food, art and entrepreneurship. The proceeds are shared among the jewelry makers. Yurima has over ten years of experience making and selling jewelry and previously taught a jewelry making class at La Casita, a community-led education and fitness activity center serving Southwest Denver. Yurima Crowley is originally from Caracas, Venezuela, where she earned a bachelor’s degree in graphic design. She and her son moved to the United States in 2015, and she became a full time staff member at ACC in 2018.

Mayra Aviña is a first-generation Latinx woman of Mexican descent. Originally from Santa Ana, California, she has a B.A. from the University of Redlands and an M.S.W. from the University of Denver, where she studied organizational leadership and policy practice. She is passionate about serving immigrant and Latinx communities in neighborhoods affected by poverty, as well as creating safe spaces where people feel empowered, strengthened and inspired to be their best selves. Prior to ACC, Mayra worked for the YMCA of Metropolitan Denver, where she was the site director of an afterschool program in Globeville. At ACC, Mayra engages youth and adult volunteers in meaningful activities that connect and serve local families. Mayra aims to instill a growth mindset in those with whom she works, while also teaching self-care and mindfulness practices.

The Board of Directors meets monthly to ensure that Aurora Community Connection is effective, viable and sustainable. In 2019, the Board is focusing on expanding ACC’s marketing and outreach efforts, planning fundraising activities and revising the organization’s strategic plan.

Previous
Next
Scroll to Top